Skip to content
HomeHouses of Parliament Tuesday 17th May 2011

Through my CAFOD links I am invited to meet at the Houses of Parliament in London for a
bonding get together of fellow activists from East Anglia and to meet Sir Henry Bellingham (more later).  We assembled at 10.30 and after about forty-five minutes we are through security and standing in Westminster Hall (old St. Stephen’s Chapel) waiting to be collected by our sponsor and our guide, The guide (Roger King) walks us about for over an hour crossing and recrossing the corridors. Full of history. Not just the Pugin design and decoration but vi 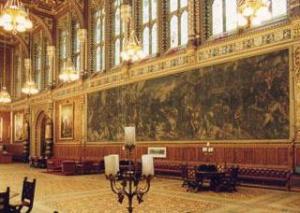 sual history everywhere. For example, the Royal Gallery which is an everyday corridor is also used for important occasions such as state receptions etc, The walls of the Gallery are dominated by two enormous paintings by Daniel Maclise depicting the death of Nelson and the meeting of the Duke of Wellington and Field Marshall Blücher on the field of Waterloo.

The Royal Gallery is also used for receptions for visiting foreign statesmen and dignitaries such as Haile Selassie in 1954 and Nikita Krushchev in 1956.

US Presidents Ronald Reagan and Bill Clinton also addressed both Houses here, as did King Juan
Carlos of Spain and President François Mitterand of France.

President Obama is scheduled to address both houses from here.

Unsurprisingly, General de Gaulle declined to do so!