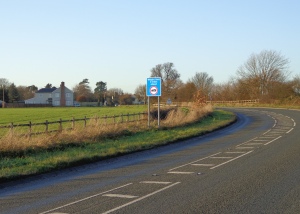 As we finish the year, I thought I would share a success story.
The B1070, Benton Street, Hadleigh, Suffolk is infamous for its road problems.  It was not designed for a lot of traffic. It is a classic horse and cart road from Manningtree to Stowmarket and Bury St. Edmunds. The volume of heavy traffic on the road has increased as a result of Felixstowe becoming a major port. We now have over 3,000 vehicle movements a day. Much of this is personal vehicles accessing and exiting the A12. But there is also a significant volume of Heavy Goods Vehicles (HGV’s).
For over twenty years Benton Street has enjoyed a weight restriction due to the number of old buildings – some dating from Tudor times.  HGV’s are banned because they damage the old brickwork, overhanging buildings and lime washed walls.
Traffic coming from the West is properly advised that there is a weight restriction on the road into Hadleigh. No such warning was on the road from the East (Ipswich and Felixstowe) only an advice to avoid East Bergholt.
Coming off the A12 on the Eastern side there are now four signs within a hundred yards, pointing out the weight restriction and HGV traffic is now directed back onto the A12 to find a more appropriate route.
Full marks to the County’s , Skills and Environment Department.
There are now no excuses for dragging an HGV through Benton Street.
Eternal vigilance is price of liberty and I fully expect the Benton Street Squeeze supporters to continue monitoring the situation and reporting (a much reduced volume of) incidents to the County’s Trading Standards.