The Friends of St. Mary’s are the fund raising arm of The St. Mary’s Hadleigh Church Trust – a charity formed to assist with the benefit and upkeep of the Church building and its surroundings.
Today they hosted the second Hadleigh Open Gardens Day – sixteen gardens were open to the public throughout Hadleigh. We opened our garden last year but this year we stood back and put our focus elsewhere. I had in any case seen some of the gardens as I delivered the “garden pack” to a few exhibitors.
s Lunches (an innovation this s Lunch as well as taking the money.
The food department served over fifty meals, so despite the poor weather and competition from the World Cup, Wimbledon and the Rugby Club Beer Festival I think they did quite well. The event attracts people from outside Hadleigh and last year we even had visitors from Texas. Elsewhere in the Church were the home made cake and plants stalls. 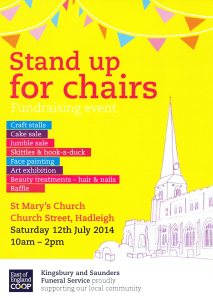 Next week the Deanery are holding the fundraising event Stand Up for Chairs. This is focused on raising funds to purchase the chairs which are to replace the pews. Over thirty thousand pounds has been raised so far but more is required.
The Church currently has a selection of chairs on display and you have the opportunity to vote for your preferences.
So turn up on Saturday and if you can’t find as excuse to spend money on the stalls then just donate it!
I look forward to seeing you there.