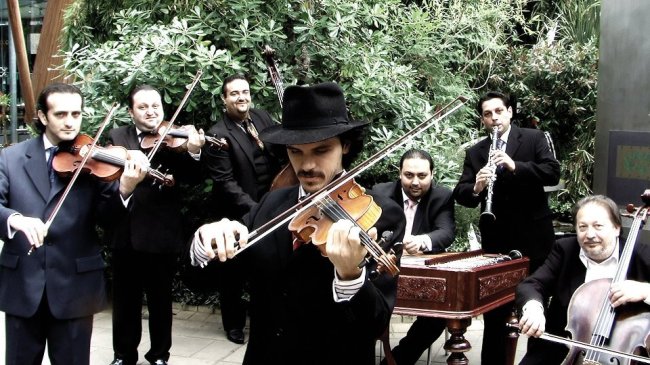 On Wednesday  Alice & I went to Bury St. Edmunds for a light dinner at Carlucchio’s and then an evening of Gypsy music at the Arc.
The star was Tcha Limberger leading his Budapest Gypsy Orchestra. It was fantastic. Not what we were expecting and a tad more artisanal than smooth. Nevertheless it was a enthralling evening and I have cribbed the following comments from various reviews which give the flavour of the evening.
Bursts of soaring musical tragedy and czardas madness delivered with an astounding purity of sound and hardly imaginable depth of musical dialogue. An accomplished multi-instrumentalist, Tcha Limberger is from a famous family of Gypsy musicians growing up with the Gypsy-jazz of Django Reinhardt. Now just 36, he tours with this orchestra of hand-picked Gypsy musicians from Budapest where there is no ‘Primas’ who commands such respect.
The repertoire includes csardas, verbunk and laments from the Budapest ‘Magyar Nota’ Gypsy orchestra tradition of the 19th and early 20th centuries with the beautiful voice and playing of blind violinist Tcha Limberger and his incredible band!
In true Hungarian Gypsy Band style they switch between soaring intensity and smouldering pathos delivering a passion and technical virtuosity that is astounding.
The violin playing of Tcha Limberger showcases specifically the folk music played by Gypsies in a small area of Transylvania called Kalotaszeg. There are three main repertoires played, Hungarian, Romanian, and Gypsy (a mixture of both)
Thanks mostly to Bela Bartok and Kodaly this music was saved from dying out. In the early 1900’s, once Magyar Nota became very popular the locals would prefer to sing Nota tunes than their own folk tunes.
Bartok was just in time to save it and then Kodaly introduced the real Hungarian folklore sounds in Schools. They both realized that this very old traditional local music was historically much more important than Magyar Nota.
And a fascinating evening was had by all. Samples of tcha Limberger’s music can be found on YouTube