On Sunday 16th December I attended a late Chanukah party at the Triangle Jewish Genealogical Society, just up the road from Raleigh, North Carolina.
One of the features of the afternoon was a Kvel & Tell and I delivered the following introduction to the film “The Vanishing Street” which focusses on Hessel Street in London’s East End.

“Ladies & gentlemen and Debbie, very many thanks for inviting me here today to Kvell and Tell about the film, “The Vanishing Street” (which is showing behind me – but with the sound switched off) which tells of Hessel Street in London’s East End. 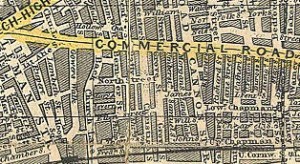 We are going to deal with Hessel Street’s place in East End social history and its place in my family history and in my wife’s family wanderings.
What qualifications do I have for being here today?
First my great grandparents lived in Hessel Street in 1883 when it was called Morgan Street. In 1901 Alice’s grandfather stayed in the adjacent Christian Street when he was a jobbing tailor en route to the United States from Roumania.
Hessel Street is famous as a Jewish Street Market.
Eric Levene, author of Feinstein’s Theory of Relatives writes of Hessel Street, much in the manner of Damon Runyon with his ability to place people and events in time and geographical location

“In the beginning, there were no Jews.
But by the 1920’s, Hessel Street market, in the heart of London’s East End was full of them. There were butchers, bakers and chicken soup makers, costermongers and a host of wheeler-dealers and luckless shpielers.
A 200 yard long and maybe 10 yard wide sardine tin, crammed full of vibrant Jewish life and, as nature would have it on occasion, death. They came from all over. There were Poles & Russians, Latvians and Lithuanians, Moldovans, Ukrainians, Rumanians and Georgians, plus a multitude of others who had escaped the pogroms that had been raging across Eastern Europe.
And remarkably, they all got along with each other without the need to argue; unless they needed to”.

Anyone of a certain age with an East London connection will be aware of Hessel Street and its place in social and mercantile Jewish East End and many more will have heard tales of it from parents and grandparents. There is a Facebook Group of Hessellters and they meet and hold informal lunches in Westcliff, Essex near the mouth of the Thames.
The Vanishing Street is a wonderful 20-minute documentary film and is readily findable on Youtube. It was made in 1961 as the bulldozers moved in to demolish the street’s decrepit old buildings.
By then the market was almost a relic.
This film purports to show a typical day in the life of the street, and its declining but still vibrant Jewish community
The film begins with a smartly dressed surveyor with his theodolite, measuring up the street for demolition as the market stalls are being set up and the locals, meet, chat and go about their business
We see old men with black hats and long beards, sizeable ladies with loud voices, Wurst and viennas, fish (including I think a conger eel), pots and pans, dresses and toys, a barber’s shop and a dress factory with dozens of women at their Singer sewing machines.
By 1961 the market was almost a relic. The London Docks were moving to Tilbury and people were being decanted out of the area into nice new more sanitary housing in the new towns of Harlow and Basildon.
There were still many Jews in the East End but nothing compared with a few decades earlier.
Economic progress and the Blitz had moved them on.
The joke was always that Stepney Borough Council always saw its purpose as demolishing the buildings which the Luftwaffe had missed.
In the early 20th century Hessel Street was the East End’s main Jewish market, open every day except Saturdays
The narrow street was filled with small shops and stalls
Chickens and other poultry were kept in cages; buyers selected one, had it killed according to kosher ritual and dressed while they shopped elsewhere
There were also many wet fish stalls, and general shops
Possibly it was the last of London’s ghetto markets
I have a cousin in London who recalls that her mother always bought her chickens from the “Jews Market” because of the freshness and the quality – even though the Watney Street market had cheaper chickens and was closer to her home.
In Hessel Street, and in much of the East End, Jewish life has been replaced by Bangladeshi life – and there are hints of this in the film.
The kosher poulterer has been replaced by the Halal butcher.
Jewish market stalls have been replaced by Bangladeshi stalls, selling very similar things
Jewish poverty has been replaced by Sub-Continental poverty and Jewish striving by their striving
What is said today about the people fighting their way into Europe absolutely echoes what was said about Jews between 1880 and 1905 when millions fled from Russia and Poland
Then as now there were people traffickers.
Then as now people were fleeing desperate circumstances
Then as now there were the unchanging complaints about immigrants and their strange ways of life
In 1871, before Jewish immigration, the average occupancy of a Whitechapel house was just over nine people, in 1901 it was close to 14
At the beginning of the 20th century, there were 120,000 Jews in the East End
Now there are very few. As the years passed, people moved away to more comfortable places.
Where there were over 100 synagogues – today there are only three
Seen today, The Vanishing Street is a nostalgic film but not a sad one
The East End was somewhere to flee to and somewhere to escape from.
Thus we see in the film, the continuing dynamic of street life and everyday life because as we all know “For things to remain the same, everything must change”
And that concludes my Kvell and Tell on The Vanishing Street.
Thank you for your patience and attention”.

It went down well and there was a lively Q&A afterwards. The East End diaspora is everywhere!